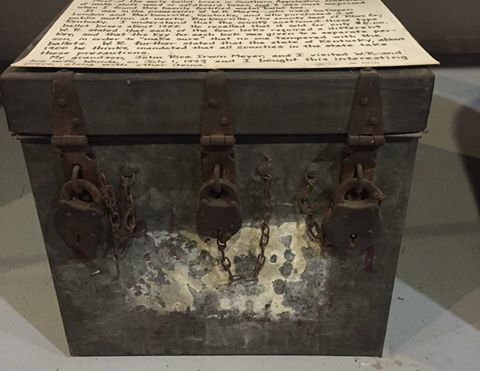 Most of the early ballot boxes in Southern Appalachia were created out of make-shift wood or cardboard, so we were most surprised to discover this heavily fortified metal ballot box.

In 1955, W.R. Mays purchased the ballot box for $5 at public auction in Barbourville, the county seat of Knox Co., Kentucky. W.R. stated that the box had four padlocks—each of them requiring a different key. Furthermore, each of these keys were distributed to different people, in order to ensure that no one tampered with the ballots. W.R. further stated that in the early 1900s, the state of Kentucky mandated that all counties in the state take these precautions.

This piece was added to the Museum collection on July 1, 1997. It is located on the second floor of our Hall of Fame building.